2012: Year of the Technological Apocalypse 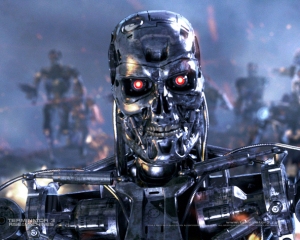 The following post is one post in a series of posts in which I attempt to explain my lack of posting since I started this blog with the hopes of regular posting. Or something.

So there I lay, on my couch, in my underwear, sweating the sweat of a man skirting obligation on a hot Philadelphia summer afternoon to watch just one more wrestling video on Youtube, when BOOM – something died loudly right outside my window.

My first thoughts went straight to catastrophe: the neighborhood had thrown in the towel against the oppressive heat of this unrelenting summer and revolted. I was mere steps away from heading to my panic room when the sound of my central air uttering its death rattle entered my ear canal, followed milliseconds later by the unceremonious fizzling out of all things electronic in my abode.

Before I could even utter a defeatist “Shit,” I could hear my neighbors loudly questioning the gods of electricity, sticking their heads out of windows and staring toward the source of the blast. I merely sat on my couch, shrugged my shoulders, and sighed.

A transformer had blown, but I was far from surprised. You see, friends, I am what a writerly cohort of mine calls a ‘jammer,’ one with great misfortune when it comes to electronics, and 2012 has so far been a banner year for my dubious superpower. (Gratuitous friend plug!)

When the ball dropped back in January, I promised myself and those around me who are forced to hear my droll boasting on a daily basis that my BIP would at the very least be sent to a publisher by December 31st of this year. Apparently, that very same moment, the aura surrounding my body decided to unconsciously go to war with all things technological, as my life since then has been a non-stop succession of pieces of machinery committing suicide before me.

Shortly before the new year began, the factory hard drive of my 2010 Macbook Pro went kaput. To be fair, the young machine had a rough go of things early on when it met my dog and his penchant for chewing on highly illogical inanimate objects.

Regardless, the drive needed to be replaced before I could even establish my foolish New Year’s Resolution, and so it was. I went to see a friend who worked for a local Mac repair specialist, and they fitted me with a brand-spanking-new hard drive with a seemingly unnecessary warranty.

That is, it was seemingly unnecessary until sometime around March, when the drive died for no apparent reason. So another writerly friend who is somehow more committed to seeing me get published than getting his own second novel published (Plug the Second!) just gave me a spare netbook he had lying around.

Things were grand! Aside from a cramped keyboard and a less-than-stellar battery performance, I had a writing implement. That is until one night when I tripped over its always-necessary charging cable and caused it to fall face-first onto my knee of apparent steel. It was salvageable, but with a keyboard as rippling as the tidal sea and a battery that needed to be held in place by masking tape and pure manly know-how, change was necessary. A warranty needed to be exercised.

By mid-June, I had the ol’ Macbook back in working order, and my writing went on a tear. Sure, I neglected this very blog, but trust me: I was writing my BIP and I was happy about it. Everything was moving swimmingly until a little over a week ago when the MBP locked up while I was watching another human’s Youtube-streamed playthrough of Minecraft in yet another episode of my life’s inherent greatness. Upon attempting restart, my poor little Apple death machine fell into an infinite loading loop. I got a little nerdy and restarted it in single user mode (that place you used to call MS:DOS in grade school when you wanted to play Oregon Trail) and was met with a ‘disk0S2 i\o’ error code, which in nerd speak is pretty much this.

I exercised the warranty on the drive yet again, and I now await my fourth total hard drive for a two-year-old machine, typing this very post on the zombified netbook of Eric Smith, the very screen of which is inexplicably half-separated from its foundation.

Have I given up?

Am I miraculously going to meet my December deadline regardless of this seemingly supernatural interference in the technology I surround myself with?

Are netbooks comfortable to type on for men with preposterously large hands?

I will move forward with a rejuvenated computer (hopefully as soon as tomorrow) and view the repetitive digital calamities of this calendar year as naught more than several well-strung-together roadblocks on my path to publication. I will recover, I will re-gather my thoughts, and I will retain my course.

But I write this tonight (this morning when you read it) to provide you with a reason for my prolonged absence from this once-promising little blog. This post is certainly not an excuse, and neither will its kin be, regardless of what category I save them to or what tags I assign to them.

This is as much a reaffirmation of your readership as it is of my own authorship. This blog, while initially established as a verbose practice arena for my inane musings, has always been intended to hold me accountable. And you, dear reader, have failed miserably in that endeavor. But worry not; I forgive you.

Your eyes scanning this page over the steam emanating from your morning cup of joe are signing a contract; you do hereby vow to be my judge, jury, and executioner in all things literary. It is officially upon you to keep me in line. I have proven since the inception of this little insignificant piece of the internet that I cannot be trusted at my word, that my goals are not accomplishable so long as I am the one holding myself to them. I task you, dearest reader, to slap the shit out of me the next time I fall off the rails. I give it a week.

2 thoughts on “2012: Year of the Technological Apocalypse”